We join the crowds descending to the river’s edge to marvel at the spectacular parade of Tall Ships!

On our way to Amsterdam, we visit our Dutch friends Carla and Sjaak, from our recent river cruise, at their beautiful flower shop in Erp!! 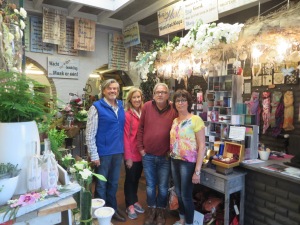 We accompany Carla on a flower delivery to the famous horse stables and education centre close by. Anky Van Grunsven is a world and Olympic champion with three gold medals at the Olympic Games in Sydney, Athens and Hongkong. Anky was born in Erp and they are very proud of her achievements. (Check her website here). As you enter the village, statues of her two victorious horses stand proudly! We are given a tour of the elaborate, large horse stables, (up to 25 international horses stabled there and their riders tutored by Anky and her husband). “Mr Ed” here is training for the next Olympics! 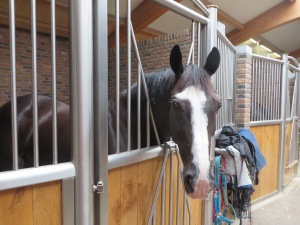 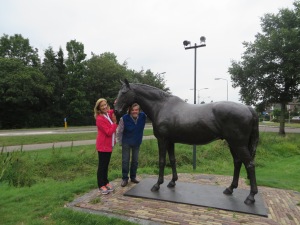 Sail Amsterdam is one of the largest maritime events in the world, and the largest event of any kind in the Netherlands. Every five years, dozens of tall ships and hundreds of other historical ships sail into Amsterdam. Numerous other ships and boats are present in the parades besides the participating ships, amounting to 8000 boats in total. The Dutch Navy ship proudly leads the procession into Amsterdam! . . . here they come!

Thousands of spectator boats accompany the tall ships down the river! WOW! We have never witnessed so many ships, boats of all sizes & descriptions in one place!Has to be seen to be believed! The Heineken boat, “clapper” (clog) boat and singers provide beer and amusement – as does this tropical party boat!!

This ship from Columbia looks so impressive and had the crowd cheering as its 60 sailors looking striking in yellow, red & blue shirts, stood high up on the spreaders of the masts! as it majestically sails past us.

The Young Endeavour from Australia also part of the spectacle. We go aboard and meet and congratulate some of the Aussie crew, two girls from Melbourne!!

There were flotillas of tugboats & traditional Dutch sailing yachts!

The large white sails of Esmeralda, “The White Lady”, glided down the river & the crew in their white uniform waved to the applauding crowds. Their red safety harnesses are visible!

Mark is impressed with the size of this enormous naval ship fender!

The 2nd day of the festival – thousands of boats created a whirlpool effect, circling up and down the river past the berthed tall ships. 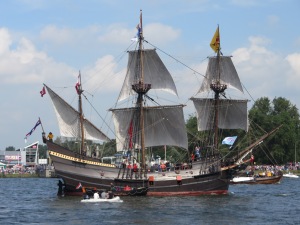 The rubbish crew look efficient on these “rubbish” bike -trailer.

The roads are busy with “tuk-tuk” taxis and loads of bikes.

Our last few days in The Netherlands is based 20km north of Amsterdam at IJmuiden – on the coast.

We headed off to see the diverse, multicultural Beverwijk Bazaar!

Cycling through the National Park, parallel to the beach (the North Sea), we come across these friendly guys??. . . Highland cattle and grey horses!

We arrive in Haarlem and picnic beside a canal, admiring this beautiful church.

After two fabulous months, predominantly in The Netherlands, it’s time to leave! We have enjoyed all aspects of life here . . . the scenery, the bike-paths (mainly flat!, the weather (their hottest recorded temperatures) and of course, the very hospitable, friendly people we met along our journey.

We board the DFDS overnight ferry to Newcastle, UK, then Bruce directs us north to Scotland!